It looks like the time has come. Say good-bye to BlackBerry.

Over a year ago, we wrote this post about Preparing for Life After BlackBerry, and while their decline has been slow, it has also been pretty steady. According to this article from CNN, announcements were made earlier this week confirming that decline, including lay-offs by the end of the year of over 4000 employees and posting a quarterly loss of one billion dollars. (Does anyone else picture Dr. Evil every time they hear that number?) 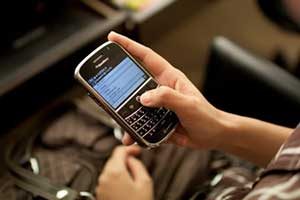 Rumors have also been floating around that BlackBerry may be looking to sell the company, although that has not been confirmed. The big question at this point would be though…who would buy it? The simple truth is that BlackBerry has not been a major player in the game for a long time. Their hardware and software is behind the times compared to the big names in the mobile device market, and it seems unlikely they could catch up, especially given the disastrous results from the release of BlackBerry 10 back in January.

BlackBerry has mentioned trying to focus more on the corporate world, and gear themselves strictly towards government and businesses, but given the popularity and exceeding technology of Apple and Android, and especially now that Microsoft has bought Nokia and is focusing on businesses, it seems like a long shot that they will be able to have any success in that market.

So, what does this mean for us?

Given that the majority of people don’t use BlackBerry anymore, not much is going to change. There are some industries, like the government for example, that do still use BlackBerry as their primary devices. That isn’t really a big surprise given how long it takes for the government to adopt new technologies, so the imminent death of BlackBerry might actually help propel government agencies to join up with today’s new technology. This means that here, in the Washington DC metro area, there is probably a higher concentration of BlackBerry users.

We have some advice for you: Start looking outside of BlackBerry, and do it quickly. It doesn’t look to be too far in the future when BlackBerry won’t be supported anymore, and will stop being sold.

As of right now, Network Depot does still support BlackBerry devices, but we have not made these our primary focus, especially since nothing very new has come out of BlackBerry in a long time. We are finding that many companies are using Android and Apple technologies for their mobile devices, although we do think we will start to see a rise in Microsoft mobile devices going forward.

Bottom line is this: If you have a BlackBerry device, or if that is what your organization uses, you need to start thinking about switching, and you probably want to do it quickly.

Not sure which type of device would work best for you or your company? Give us a call! We’d be happy to help you figure it out.